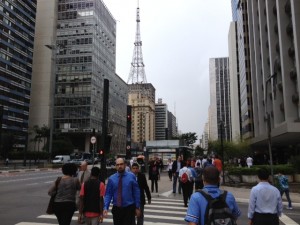 “I live in the nicest neighborhood in São Paulo, I eat out several times a week at nice restaurants, I go out with friends and order nice beer and I just got back from vacation in Colombia with my girlfriend.”

That’s not the kind of lifestyle that English teachers are normally able to brag about. Elsewhere in South America teachers often make just enough to get by, and never are they able to afford week vacations to Colombia’s beaches on their salary. But as I learned from a German English teacher in São Paulo, it is possible to have an upscale lifestyle as an English teacher.

“Your lifestyle sounds pretty expensive, how do you afford it?”

“I teach English and German to clients and I charge them up to R$65 per hour. I work about 30 hours per week.” I started doing the math in my head and I was surprised by the number that I came to.

The numbers he gave me were the highest I have heard of someone in South America making as an English teacher. Heck, he makes more than most Americans, and he works less than them too. But the biggest numbers were yet to come.

“I’m taking a course to specialize in legal English so that I can teach to lawyers. With a specialization like legal English you can charge a lot more for classes, as much as R$150 an hour.”

How Much Do English Teachers Make Outside of São Paulo?

After having that conversation I thought a lot about the English teachers that I know in Belo Horizonte. The most that I have heard of someone there charging per hour is R$65. Most people charge around R$50 an hour for private lessons. Working for an English school, teachers make half as much, usually between R$25-35 an hour.

Most teachers work around 25 hours a week, doing a mix of working for a school and teaching privately. It takes time to build up an army of private students, who pay you directly instead of half of the money going to the school, so its necessary to work for a school to pay the bills while you enlist your recruits. The average salary of English teachers in Belo Horizonte ranges somewhere between R$2500 and R$4000 a month, depending on how much they teach and if they teach privately or not.

There is a limit to how much you can teach every day. Students generally want classes in the morning before they go to work, during their lunch break and after work. It’s hard to find students to fill those in between hours. For some students you will have to travel to their home or office in order to give them class. This could eat up a few hours a day if your students are really far apart. You’ll also need to take time to prepare for classes, which could vary from a few minutes up to several hours.

Not every city is created equal when it comes to teaching English. Sao Paulo is unique in how much students will pay for English class, and you’ll have a harder time charging R$150 an hour to students in other cities. For major cities like Rio De Janeiro, Belo Horizonte, Salvador, Curitiba and Florianopolis, charging R$40-50 an hour for private classes is the norm. In poorer states in the north you might have to charge a little bit less to stay competitive. You have to do this in smaller cities as well.

How to Make A Lot of Money Teaching English

Clearly the best way to make money as an English teacher is to teach a specialized kind of English. Some of the examples of specialized instruction that teachers offer are English for lawyers, English for doctors, business English and finance English. These specializations allow teachers to charge significantly higher rates, usually in the R$70 to R$100 range.

The German teacher is able to charge R$150 an hour because lawyers have a very specific type of English that they want to be proficient in, and not many people have the technical knowledge to assist them. People will pay whatever they think the class is worth, so there really is no ceiling to how much you can charge. You could even charge R$1,000 an hour by offering English for Diplomats if you had the right contacts in the government who could afford to pay that rate by forwarding the bill to the taxpayer.

In order to justify these high hourly rates, you have to be able to provide value that is specific to the group that you are targeting. You need to have some background in whatever specialization you are teaching. People who teach business English have spent time in the business world and understand very well the lingo and culture of that world. To teach English to engineers you should at the very least have a degree in Engineering.

What kind of specialization do you have that you can infuse into your English teaching? 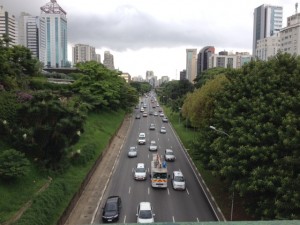 One thing that struck me about the German English teacher is how much time he had to spend traveling between classes. One day he taught 7 hours of class and spent 6 hours stuck in traffic. While he was making a high hourly wage, he didn’t have much free time to enjoy the fruits of his labor.

Money shouldn’t be the only consideration when deciding where to teach English. You can make more money in São Paulo, but your cost of living will be higher since it’s the 10th most expensive city in the world. You’ll also spend more of your most valuable asset, your time, since the city is so large and traffic is notoriously bad.

Rio de Janeiro still remains an attractive city for many because of its laid back beach culture. It is ranked as the 12th most expensive city in the world, so you’ll need to make more to keep up with the cost of living there.

Second tier cities like Belo Horizonte offer a nice compromise. Though it’s the 5th largest city in Brazil, the cost of living is significantly lower than in Rio and São Paulo, and you can make just as much teaching English in Belo as you can in Rio.