Participation in a community gives people a greater sense of belonging. It’s a fact. Getting involved is even more important when we’re a long way away from home. This post is a collection of Brazilian Gringo readers’ best memories in Brazil, shared with the community to give us all a little more insight into the way the country touches our lives.

I was always nervous flying to Brasil for the first time, especially with a 9-month-old daughter in tow. We stayed for 3 weeks to meet my wife’s family and friends. We explored throughout São Paulo, from Santos to Campos do Jordão. It was even Carnival when we were there! I loved every minute of Brasil and have plans to go back in 2019. My best memory isn’t one particular event.  It was meeting my wife’s family, spending time with them drinking Skol and trying to communicate with each other in English and Portuguese.

It was baptizing our daughter at Nossa Senhora Aparecida and sharing this special occasion with both families! It was the fresh food from the local market every morning for breakfast and the “extra forte café”! It was the culture and everyday way of life that made me fall in love with this beautiful country …. not to mention the churrasco is so much better there! Friends, family and even strangers were happy to speak to me and would always ask if I liked Brasil! I loved all of it …. the worst part of my trip was the flight home!

Lunch at the beach in Bombinhas, Santa Catarina, with four kinds of shrimp and hearts of palm salad. Beautiful scenery and horse carts driving along the sand.

To tell you my best memory of Brazil I need to say a few words about my trip there. Last year I spent some months in Brazil as a digital nomad. When I arrived in Rio I didn’t really have a well-defined idea which way to continue my travel in this huge country, and how to live as a digital nomad. But in a few days’, maybe a few weeks’ time, things (my visions) became clear. During most of my travel, except a few shorter trips inside the continent, I stayed at the Litoral and started to discover the amazing Brazilian beaches and the atlantic rainforest (like most travelers do—nothing out of the ordinary).

Soon enough, I got the idea to turn my work into some leisure activity and started to go to beaches with my laptop (of course, I did this in the safer Southern area of the country). I spent there a few hours and did my work there (I edit books). Perhaps it is not the most comfortable office you can imagine—on the contrary, it absolutely lacks a cube-like experience. For me, this experience was a limitless freedom that taught me to always remember to think out of the box. This conclusion is, perhaps, my best memory from Brazil. 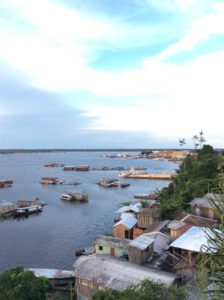 Three trips to Brazil so far have provided me with some great memories.  The top of the list has to be my son‘s marriage to a brasileira last year, what a great Brazilian casamento it was.  But the most exciting memory is my trip to the Mamirauá Sustainable Development Reserve (reserva de desenvolvimento sustentável) and staying for a week in the Uacari floating jungle lodges.  We flew from Rio to Manaus, then to Tefé and from there by boat to Mamirauá.

Tefé is a small town on a lake which is formed by the mouth of the Tefé river.  Attached is a picture from our pousada window overlooking the massive lake.  I could write pages………

I’m going to be brutally honest, it’s simply meeting wonderful girls and people. At a time when I was distraught with the society of money and the never-ending pressure of New York, it was lovely dating someone wonderful and also seeing the sanctuary of Belo Horizonte.

Exploring and living in a poor neighborhood in São Paulo had a certain kind of loveliness. Such a great city! 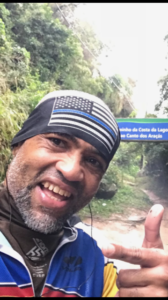 Hello folks!!! It’s kind of hard to pick a “best” memory in Brazil because there are so many. But I will share one with you. I like to run in the trails in the mountains of Florianópolis and one day I decided to take a turn into an unknown territory and, sure enough, I got lost. After 1 hour in the dark woods, I found myself back by using my iPhone backlight, which saved my ass. I was so happy at the end and realized that actually, all I did was a long turn in the hill of the Witch (Morro de Feiticeira)!

Meeting my cousins the first time. Drinking Guarana. Playing soccer in a concrete backyard. When the ball went over the wall I had to get it without getting cut by the broken glass embedded on top. Going to the market on the weekend in São Paulo. Being in Rio when the fishing boat blessing was held. Drinking my first Caipirinha. I miss Brasil.

I love the beaches and the sun. IGUAÇU FALL IS AMAZING.  And the historical cities and sites are quite interesting.

By the way, I am a Brazilian expat in Canada.

I have to say best memory of Brazil was on first of four visits there. During my first visit, I was blessed to have a friend who could drive and had a car and liked to travel. So my 10 days there were filled with excitement. She was one of the most beautiful lady I ever met. She was even more beautiful inside, radiant, fun and effervescent personality. She liked to cook a medley of dishes, liked to sing and dance too. I was immersed into her love care and family. Oh and she knew enough English to help me improve my Portuguese.

Every day we packed and was driving cross country, visiting some of the most beautiful beaches and sleeping over in heavenly pristine town in each other’s arms. I feel like crying!!…… I forgot to mention that relished eating the food that she prepared so much that I always prefer to eat at home. It was, however, appetizing eating out. She showed me some of the most beautiful beaches on the face of the earth. We took pictures every day. Her, her two daughters one son and me. There is a secret that I personally want to share….  She is like a rose bud that remains beautiful and closed during the day and unfold at night like a full blooming rose. I think it is typical of the Brazilian woman…..it’s true. Her initials are M.F.       This is a chapter of my life I will cherish for ever and I would not be surprised if I were to live the rest of my life in that beautiful paraíso with a Brazilian mulher nos meus braços 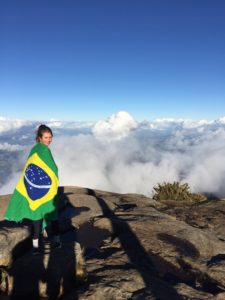 Choosing my favorite memory from Brazil is basically impossible. The entire year I spent in that beautiful country was magical…and I mean it! One of my many favorite memories was hiking up Pico da Bandeira – the third highest peak in Brazil. We started at about 3 pm and made it to the top just in time to catch the sunset. We had the sunset and the peak to ourselves as most people hike the mountain in the wee hours of the morning. After we descended the peak and returned to our campsite, we feasted on filet mignon (you know those Brazilians, crazy about their red meat!) and alfredo noodles cooked over a simple campfire.

Shortly after arriving in Brasil, my dear dear friend told me we were going to a fantastic music event – Joao Bosco Live.  I knew almost nothing about Bosco and wasn’t too impressed with the little I had heard in the US.  That afternoon was such an iconic introduction to the coração of Brasil – the depth of musical talent and feeling that permeates Brasil.  To my utter surprise the performance was (1) live, (2) free and (3) in a Shopping Mall (Analia Franco) in São Paulo!  Turned out that Bosco is such an enormous talent, as was every member of his band.  Thus began my 7-year journey into the deep musical culture of Brasil.

One other initial experience shaped the way Brasil took root inside my heart and Soul. We spent two weeks in a Pousada on Ilha Bela off the coast of São Paulo.  The combination of stunningly gorgeous beaches and blue-green ocean water, fresh seafood, warm company, and my first Caipirinha were all intoxicating. That Caipirinha burned a hole in my taste-memory: it wasn’t your average limão Caipirinha made with cheap cachaca;  it was a fresh maracuja Caipirinha made with some top-shelf cachaca that my friend chose for us! Gostosa pra caramba!

I visited São Paulo in 2010. It was an experience I’ll never forget. Stepping off that plane from America was literally like I was on a whole other planet! My first night I cried, I think I was just so overwhelmed by how different it was than what I had originally imagined.  In my mind, I was expecting this tropical paradise. São Paulo was like New York on a whole other level. But unlike New York, people were so friendly and warm! My favorite part was when we traveled into the “interior” of São Paulo, we visited a very small farm. They had every fruit you can imagine, fruits I didn’t even know existed! Seeing giant avocados, oranges, bananas, jaca, and coffee beans, etc. growing was so cool!! The highlight was when  I  saw a wild tucan eating a papaya way up in a tree! Brasil has so much natural beauty that I think a lot of people take for granted for.

The variety of memories is a true testament to the immense variety Brazil offers us gringos and Brazilians alike. Through stories of natural wonders, soccer, love and lust, and spiritual moments, the above stories give us a window into the deep bond gringos are creating with Brazil every day. Even for those like Iuliana who haven’t come to Brazil yet, the language provides a connection and gateway into its vibrant offerings. Not to mention, it’s a major advantage once they finally get here!

What about you? Tell us what your best memory of being in Brazil is in the comments.