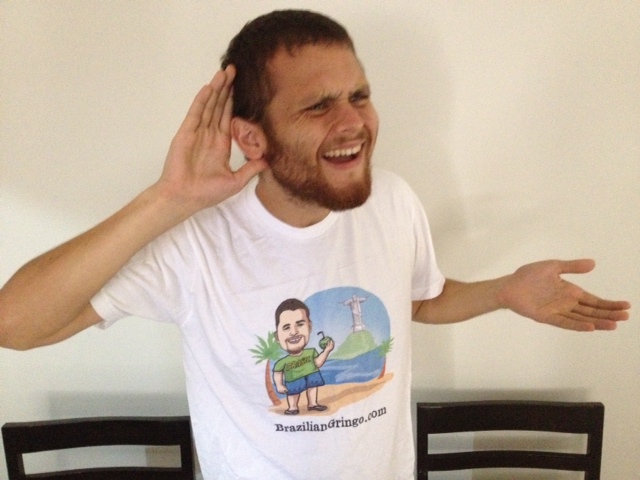 Recently I’ve observed a lot of miscommunication between gringo and Brazilians so I’ve decided to write this post to help clear up the confusion. The advice contained here will be useful for anyone who is communicating to someone in a foreign language, whether in a casual setting or in a classroom setting.

The way you speak English should vary depending on the level of the person that you are speaking to. You will need to evaluate each person’s English level on a case by case basis and make some changes accordingly. The burden of being understood is your responsibility so you must control what you say so that it is more easily understood.

Often times I see foreigners talking to Brazilians who have basic English the same way they would talk to their friends from back home. By speaking without consideration for the English level of the other person, communication is hindered, misunderstandings are more likely to occur and unnecessary barriers are put up between people.

When speaking to someone who speaks English as a second language you need to be aware of the fact that they might be a beginner level student of that language. If this is the case you need to make some adjustments to your language to facilitate communication.

On the other hand, you need to be sure that they are actually a beginner if you are going to talk to them this way. There is a lot of ego attached to language learning and there is nothing that advanced speakers hate more than for someone to mistake them as a beginner. You can usually tell within the first 10 seconds of a conversation what someone’s English level is based on their pronunciation, confidence, flow and use of non standard expressions.

Once you have determined that someone is a beginner here are some adjustments that you should make to your English to make yourself more easily understood.

The biggest difficulty that a beginner will have is understanding your normal rate of speech. Someone who hasn’t had a lot of exposure to English isn’t going to be able to decipher every word that comes out of your mouth if you speak too fast. Slow down a little so that they are able to tell when one word ends and the other word begins.
At the same time, make sure you are speaking at a rate that is appropriate for their level. If you speak too slowly they may feel like you’re talking down to them or treating them like a baby.

No matter what you do, don’t get mad or show any signs of frustration or irritation if someone doesn’t understand you. Remember that you are speaking a foreign language to them in their home country and its unreasonable to expect everyone to speak English perfectly. Relax, breathe deeply and try to put yourself in their shoes. They are probably feeling a little intimidated by speaking to a native speaker of the language that they are learning so cut them some slack.

Speaking of cutting them some slack, you shouldn’t use expressions like that with beginners. Who is cutting? I don’t see a knife. And what is slack? Find a more simple way to communicate the same meaning. Give them a break and dont make things hard for them to understand.

Understand what they dont understand

There are several types of misunderstandings that can occur and it is your job to properly recognize which way they didn’t understand and respond accordingly. Knowing which type of misunderstanding occurred isn’t always easy and requires practice and constant attention to master.

This last suggestion is pretty radical, but I’m going to suggest that in some cases you should bastardize the English language to make yourself more easily understood. Sometimes in conversation I will intentionally say things that are technically incorrect uses of the English languages but they are more readily understood by Brazilians. This means I change the way I pronounce certain words, I use improper grammar and I use false cognates because I know the person I’m talking to doesn’t know the proper way of saying it. I even go so far as to invent new words inspired from Portuguese words and expressions.

This is a pretty polemic (see what I did there?) topic and one could argue that I am hurting their English learning by doing something like this instead of teaching them the right way. But its not always appropriate to be teaching English to someone in conversation, and sometimes its more important just to get the meaning understood in order to move on to something more important.

An example of doing this is by using the word stealer instead of thief. Someone who has learned the verb to steal will understand that a stealer is one who steals, but they wont make that connection with the word thief. If I’m telling a story and want to get to the end of it without getting interrupted I might use a word like stealer to assist in understanding.

I think that as English becomes spoken as a non native language by so many people we should be more open to receiving new words and adjusting the way we speak to assist in their learning. I don’t believe that there is such thing as “correct English” or that what Webster wrote in a book hundreds of years ago should be the standard for how we communicate. At the end of the day what really matters is that we are understood and our language tools need to adapt to best achieve that end.

What do you do when speaking to foreigners in your native language to make yourself more understood?