How would you like to improve your Portuguese, make new friends and make Brazil a better place all at the same time?

English teacher in Brazil isn’t just a job title anymore; it’s a way of life for every gringo living in Brazil.

If you’re an English-speaking foreigner living in Brazil you will teach English at one time or another. This may be happen formally in the classroom or in an informal social setting.

Brazilians have a strong desire to improve their English in order to participate in the global economy. This has forced upon us Gringos that live in Brazil with a responsibility to help them achieve their language learning goals.

Even if you don’t teach English as a profession, it is your duty to help your friends on their English learning journey.
Brazil’s public education system and most private English schools do a horrible job of preparing English students for speaking in the real world. Therefore it is necessary for us to resort to guerilla English teaching tactics if we wish to see Brazil’s English improve. 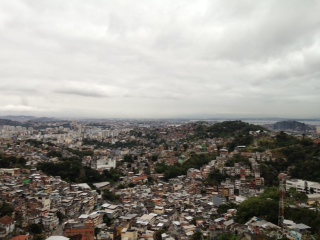 Every encounter is an opportunity to teach

Its not necessary to sit down in a formal classroom setting in order to help someone improve their English.

The other day I was at a shared office space doing some work when I decided to get a cup of coffee. I walked to the coffee room and filled a cup of freshly brewed Brazilian coffee. I tore open six packets of sugar and poured them into the cup. I looked around for where to throw it away and the empregada Sebastiana pointed me to where the trash can was hiding.

We started talking and quickly the conversation turned to how she wants to learn English because of how many foreigners frequent her work.

Now, she’s probably wanted to learn English for a long time but hasn’t taken the first step on that path. She thinks that she needs to take expensive classes a few times a week in order to learn. This is what most people think.

Most schools are not effective in teaching students English because they condition people to learn in a sterile classroom environment that is disconnected from how they use the language in real life.

I decided to show her a different way of learning. Since her goal is to learn English that she can use at work, I decided to teach her something that she could use with every foreigner that she sees at work.

I taught her “How can I help you?” since that phrase can be used in every conversation with gringos. I broke it down piece by piece, had her repeat it several times and had her practice it in a conversation with her.

Teaching English to this woman took maybe 5 minutes of my time.

An hour later I came back in for a refill and looked around like I was lost. I looked to Sebastiana expectantly, but she cracked under the pressure and lamented that she couldn’t do it. She complained that she didn’t have time to study the phrase I gave her, which isn’t a valid excuse since nobody else came for coffee and she didn’t have to clean any other area. But I don’t blame her.

Fear of speaking to foreigners is not an uncommon reaction amongst Brazilians, or any language learner for that matter.

Like many Brazilians, her biggest difficulty with English is not with the language itself, but in overcoming her fear of speaking the language. Most Brazilians know some English but they are too afraid to use what they know.

The Brazilian education system has failed millions of English learners by not giving them the tools to confidently speak English. Instead of recognizing the challenges that students will face in the real world and teaching to those needs, the system instead teaches students to how to pass standardized tests.

Students can spend years in English classrooms without ever having a real conversation in English but they might actually know more about grammar than native speakers because that’s what their teachers tell them is important to study.

You can help bring change to the Brazilian education system.

Every day you come in contact with dozens of people who want to learn English. They may have had English classes before but they likely haven’t had many opportunities to use English outside of that setting.

The biggest challenge for these people is overcoming their fear and actually talking. It might not seem like a big deal, but it’s a huge deal for them. They’re afraid of being judged for making a mistake, for not speaking like a native or speaking too slowly. They have this unreasonable expectation that they should speak perfect English or not speak at all.

What would help someone in this situation is if they could be shown that its not such a big deal to speak English to a foreigner. They need someone to be patient with them and allow them to speak a few words without feeling like they’re being judged.

Even just speaking “Hello, how are you? My name is Dr. Suess,” will give a big boost to their learning. They will stop looking at the language as something that you force out of a textbook and into your head, and will start looking at it as a tool that helps you connect with people.

Teaching English to people that you meet is a simple thing that only takes a few minutes but the impact you have will last a lifetime.

Teach English to Everyone You Meet

Your mission, should you choose to accept it, is to go teach English to one person every day that you’re in Brazil.

You don’t have to teach a complete 1-hour lesson to make a difference.  It can be as simple as getting them to use basic phrases they already know like “hello,” “how are you,” “where are you from?”

The content of what you teach people isn’t as important as it is that you’re guiding them through a mental shift in how they look at the language. The benefit you can provide is more psychological than instructional.

It doesn’t matter if you’re not an English teacher. You speak English fluently, and you were patient enough to read this post up until now. You already have the two most important skills necessary to teach English to people you meet on the street.

You don’t even have to go out of your way to do this. You already spend an ungodly amount of time in lines, waiting for the bus and stuck in traffic. In each of these situations you can start a conversation with someone and teach them a few words in English.

The worse that can happen is that they’ll clam up and revert back to speaking Portuguese. Or they will ignore you. Big deal, try again with another person.

Your Portuguese will also improve by teaching English to people that you meet. Most of the people you talk to wont feel comfortable having a full conversation in English and will switch to Portuguese. When this happens they will be more patient and forgiving of your errors because you’ll be equals as language learners.

More than likely what will end up happening is that you make a new friend. They will be grateful that you took the time to teach them something they wouldn’t have gotten anywhere else. Who knows, maybe they’ll invite you to a churrasco at their house next Sunday.

So go out there and talk to the person you sit next to on the bus. Introduce yourself in English and invite them to respond in English. Give them a pep talk in Portuguese then switch back to English.

If every English speaker in Brazil did this it would have a big impact on education in this country in the long run.