When I decided to go out for my first night in Bangkok I certainly wasn’t expecting that I’d be speaking Portuguese. I was standing alone outside a nightclub that was about to close and another foreigner had seen my shirt with a Brazilian flag. Apparently he’d lived in Brazil at one point and wanted to practice his Portuguese.

“Ah que legal, eu amo Brasil! Eu morei lá por alguns meses. De onde você é?” Oh how cool, I love Brazil. I lived there for a few months. Where are you from?

“Eu morei em São Paulo e alguns outros lugares. Eu tenho meu própio negócio então posso trabalhar em qualquer lugar que tem internet. Por isso eu rodei tanto no Brasil.” I lived in São Paulo and a few other places. I have my own business so I can work in anyplace that has wifi. That’s why I moved around Brazil so much.

“Exatamente!” he exclaimed, excited to hear for the first time in Portuguese a term he often uses in English.

“Isso! Você vai também?” That’s the one. You’re going too? 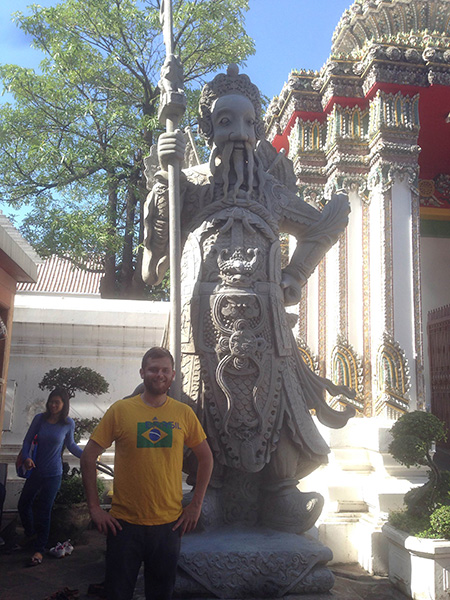 This guy saw my t-shirt and he asked if he could take a picture with me.

When you think about it though, it really isn’t that much of a coincidence that we started chatting. We’re both in town for an event that caters to the type of people who are likely to go to Brazil and learn Portuguese. We were both at one of the few nightclubs in Bangkok that expats not interested in paying for sex were likely to end up at. And it was very easy for us to talk about our common interest because of the t-shirt I was wearing. That initial conversation has lead to us becoming fast friends, and we’ve been speaking in Portuguese with each other ever since.

Since leaving Brazil a few months ago I’ve had it as my goal to speak Portuguese for at least 5 minutes everyday. It’s actually been a lot easier than I thought to meet this goal. I keep running into people who speak Portuguese wherever I go, whether they be Portuguese, gringos who lived in Brazil or Portugal or Brazilians.

Even in the seemingly most random places I keep running into Brazilians. I was sitting in a hotel lobby in Bulgaria, doing some work on my laptop when a group of 67 elderly Brazilians walked in. One of them kept staring at my Brazil t-shirt so I said hi asked her where she is from. She told me she is Gaúcha (people from the state of Rio Grande do Sul) and is on a month long trip around the Balkans with her group.

She asked me where I was from and was surprised to hear I am American. As I explained my story of why I chose to live in Brazil she was surprised, but found it interesting. Even though more and more foreigners keep moving to Brazil, a lot of Brazilians have a hard time understanding why gringos would leave a place many perceive to be paradise to move to a place many can’t wait to leave.

When you choose which t-shirt you put on each morning you’re choosing to broadcast a certain message to the world. You’re telling people to treat you in a certain way based on the way you dress. If your t-shirt has a graphic or something written on it you are revealing something about your personality through that shirt.

Since you’re reading this site you’re probably a Portuguese speaker or in some way a fan of Brazilian culture. Why not broadcast that message to the world and invite more conversations about a topic that you’re passionate about.

Simple Brazil t-shirts aren’t that great for starting conversations in Portuguese though. I’ve run into people wearing shirts with Brazilian flags on them. The first time I saw someone wearing one of these shirts I approached them and started speaking to them in Portuguese, hoping that they were Brazilian or a Brazilian Gringo. Nope, just a football fan.

I started thinking about what kind of message I could put on a t-shirt that would invite people to start the kinds of conversation that I’m looking to have, namely conversations about Brazilian culture or conversations in Portuguese.

I remembered looking for a t-shirt like this when I was in Brazil, but having a hard time finding any t-shirts that were written in Portuguese. I had no trouble finding t-shirts written in English, sometimes with comical results. But no Brazilian made t-shirts in Portuguese.

So I decided to create my own that says, “Saudades,” and has a picture of Brazil on it. 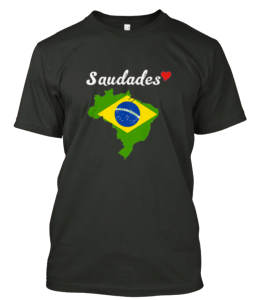 Saudades is a uniquely Brazilian word. Your friends that don’t speak Portuguese are going to ask you what it means, which will give you an excuse to talk about Brazil. Brazilians will love you for wearing the emotion that they are all feeling on your t-shirt.

I created a Teespring campaign to have this shirt made. The way it works is that a 25 people have to preorder the shirt before they will print it. If we can’t find 25 people who are dying of saudades in a week, then nobody is charged but nobody gets the shirt either.

You can buy the shirt by clicking this link.

If you’ve left Brazil, are morrendo de saudades and are looking for a way to meet Brazilians, wear this shirt the next time you go out. You never know what could happen. Maybe you’ll meet the Brazilian who just arrived in the US to study English for 3 months and is looking to make local friends.

If you’re living in Brazil and want to make it easier for people to start conversations with you, just wear this shirt. Everybody has something to say about rice and beans so this shirt will invite just about anybody you meet in Brazil to talk to you. Maybe they’ll even invite you over for lunch to try their mom’s arroz e feijão.

Get it now while you have the chance.

36 Portuguese Words You Need To Learn Before The Olympics