Once upon a time, getting an iPhone set up with 3G coverage in Brazil was an ordeal that instilled dread into the hearts of short term travelers in Brazil.

The process was complicated and highly variable. A satisfactory outcome could not be guaranteed.

First you’d have to walk into various cell phone providers and ask them what plans they offered. You couldn’t just look online for prices because they might not be accurate.

If you were lucky one of the stores offered a pay as you go plan that included data services, otherwise you’d have to sign up for a monthly plan that you’d have to cancel when you left.

Then you had to make sure that they would actually give you a SIM card without asking for a CPF number, which you might not have if you’re only staying for a short while.

A law was passed in 2012 allowing foreigners to register a SIM card with their passport number, but a lot of stores still didn’t pay attention. With the law on your side you could force an attendant to accept your passport number, but they would only reluctantly do this if you were skilled in the art of Brazilian persuasion. More likely you’d go around to several stores before you got it figured out.

Then you had to make sure that they had a SIM card that would fit your phone. Some agencies would only have a Micro SIM, but you needed a Nano SIM, so you’d have to watch tutorials on Youtube to learn how to make your SIM card fit.

All of this had to be done in Portuguese of course. If you didn’t speak it well enough to know what was going on, you had to bring a friend or hope that one of the employees or customers at the store could help you out

It might be the case that in some parts of Brazil you still have to go through all of that trouble to get your SIM card installed. You can watch this video to see what the process was like in Belo Horizonte last year.

For Rio de Janeiro at least, the process is a lot simpler.

iPhone 5’s and 6’s now come factory unlocked, which means you can just remove the SIM card, insert a local SIM card, and you are up and running. 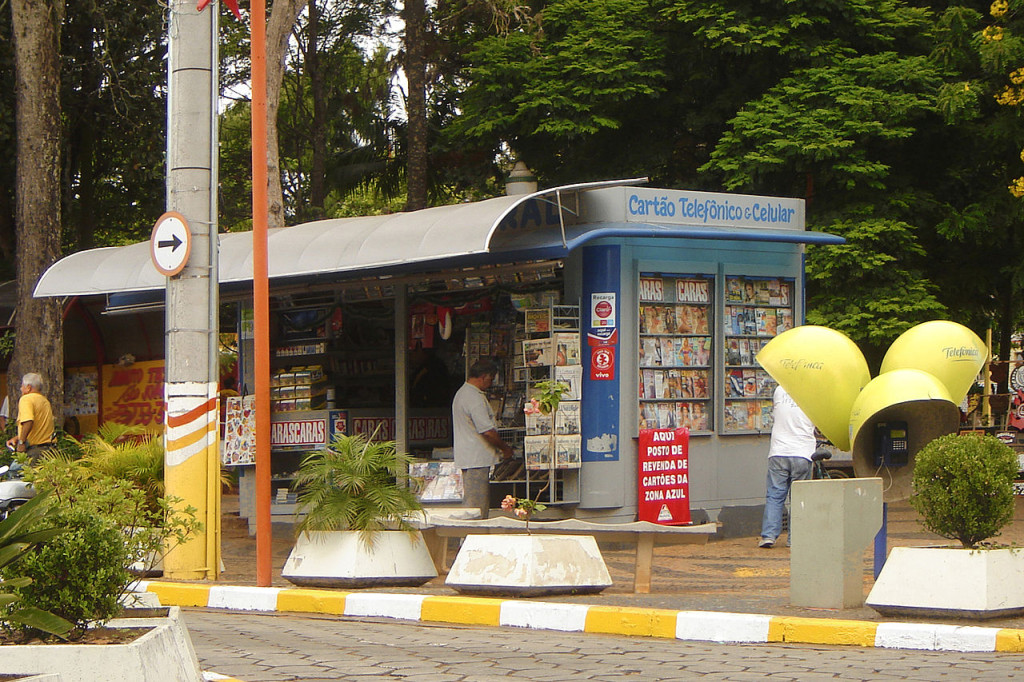 You can get a SIM card at most banca de jornais in Rio. Just make sure you don’t pay the gringo price.

4 simple steps for setting your iPhone in Rio de Janeiro

1) Remove your SIM card using a paper clip. You will want to keep your SIM in a safe place, such as in a Ziploc bag, so that you can find it when you leave Brazil.

2) Go to any banca de jornais (ubiquitous little kiosks that sell newspapers, magazines, and other items). Make sure they have the right sized chip for your phone. Make sure to pronounce chip like ‘sheep’ or else they won’t understand you.

As far as which carrier to use, none of them are really that great. It used to be that you’d want to get the same carrier that your friends had, since it’s cheaper to call within the same carrier. Nowadays everyone uses Whatsapp (aka zapzap) to text and call since it’s free.

Make sure you don’t pay more than R$10 for your SIM card. The standard procedure for a Carioca Malandro is to charge twice as much to gringos. If the price you’re quoted is anything other than R$10, just walk away and go somewhere else.

3) After inserting your Brazilian SIM, you will receive a few text messages that provide codes to activate your new SIM.

4) Once activated, return to the banca de jornais and ask for a recarga. If you use TIM you can also add more credits online.

Getting a SIM card in Brazil is one of those things that should be easy, but is actually very complicated.

The best way to proceed in these situations is to read about experiences from as many people as you can in order to have an idea of how other people overcame common challenges.

Here are some more links for your research.

Kevin Porter’s 5 Easy Steps to Get a Cell Phone Number in Brazil.

Do you have any horror stories with getting a SIM card in Brazil?

What is Rio de Janeiro whispering?